What are the key variables that help keep the food hot the longest? What type of food tray and what type of delivery carts can help keep the food hot? We conducted a temperature study to answer those questions. The purpose of this white paper is to interpret the results of that study and offer suggestions for you to better serve hotter meals in housing units. If you aren’t looking for the detail and background of the temperature study but only want to know what is recommended, just skip to the bottom of this article.

THE IMPORTANCE OF HOT FOOD

It is critical to get certain foods up to certain temperatures in order to kill pathogens. Anybody in the food service industry has been trained over and over on what these details are. This paper is not getting into this aspect of hot food. For the purposes of this study, it is assumed that the correct food temperature was reached in the food preparation process. However, after it has been cooked, how hot must the food be kept in order to stay safe? How long will it stay safe? These are key questions to answer when dealing with meals being delivered to the housing units.

After the pathogens are killed in the food preparation process, it takes several hours for pathogens to be reintroduced into the food and grow to a dangerous level. Most standards and guidelines allow 2 hours for hot food to stay out in ambient temperatures before it is too late to serve it safely, some allow 4 hours. Except for extreme circumstances, hot food delivery to the housing units is not really a matter of food safety.

This is more of what this issue is all about. Have you ever put a spoonful of soup in your mouth only to be surprised that it is lukewarm or cold? You want to spit it back out. If you get everything else right- great recipe, fresh quality ingredients, perfect preparation, it is all for nothing if hot food is served cold. Food that is supposed to be hot but isn’t is very dissatisfying. I was told by a seasoned vet in the corrections industry, “You will see unrest (possibly dangerous unrest) if you mess up on either of two things; mail and food. Don’t ever get those wrong in corrections or you’ll end up paying for it.” There are plenty of articles and reports to back up the connection between food problems and inmate unrest, including full-scale riots.

When we take up the mission to make sure hot food is served hot in the housing units, we are addressing an important safety issue but it’s not food safety. Preventing potential inmate unrest is critical. In a less dramatic tone, serving satisfactory meals improves the morale and temperament of the inmate population, reduces the administrative burden of responding to complaints and lawsuits, and reduces food waste. And in the end, we all take pride in our work and want to do a good job of what we are charged to do.

What is considered a satisfactory temperature for hot food is, of course, subjective. Different people hold different opinions on how hot is hot enough, and different foods have their own desirable “hot” temperatures as well. For instance, soup might not be considered hot enough unless it was at least 150°F, but a hamburger would be probably considered still “hot” if it was 140°F. The general guidance of chefs is for hot food to be served between 140°F and 150°F and anything below 125°F is too cold to serve. For the sake of this study, we will consider anything below 120°F to be unsatisfactory. Each chart will have a red dotted line at that temperature level for comparison.

In this paper, we analyze the temperature loss over time and compare various combinations of trays and carts. For each trial, we will review the data and draw conclusions. In addition, we’ll analyze key variables in the tray make up process and their effect on the ability to serve hot food. Finally, this paper will summarize key considerations in serving hot food for meals delivered to housing units.

Each of the 5 study trials followed the same methodology. 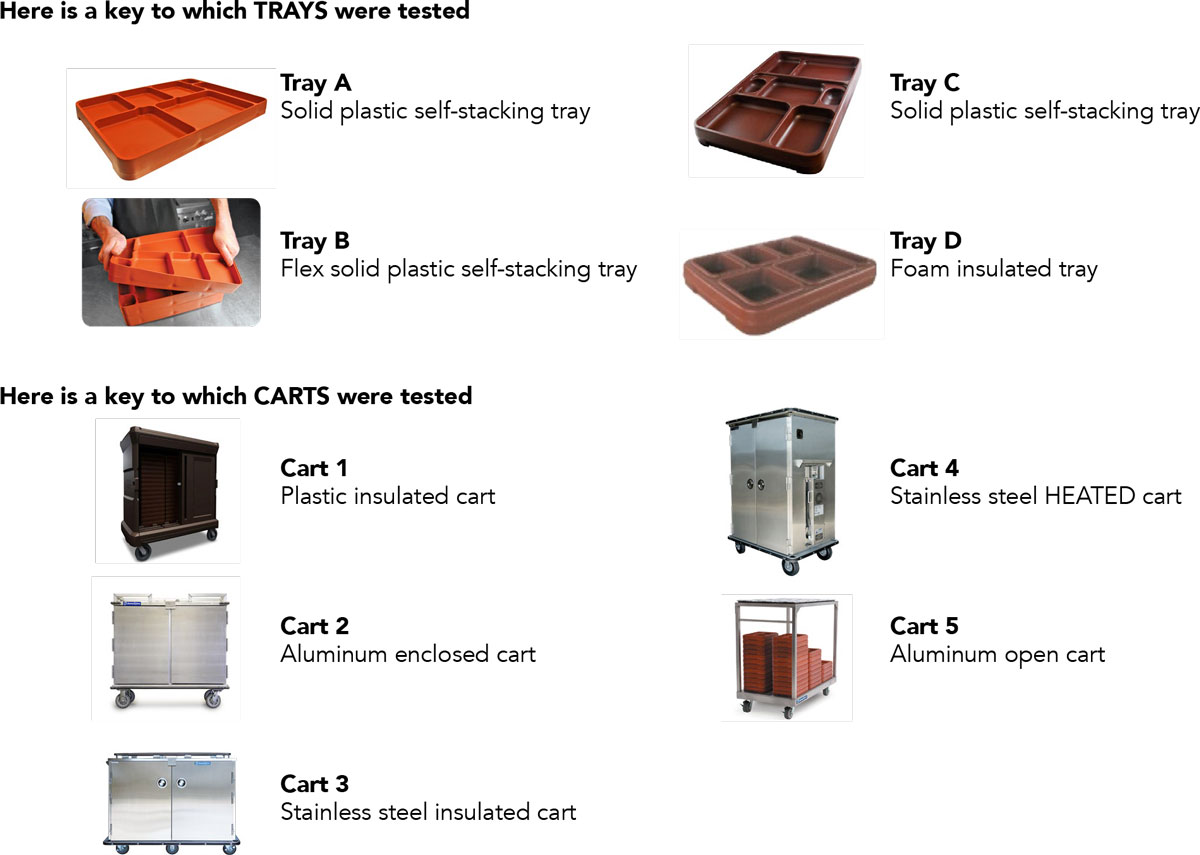 Hot food items were portioned into the same two compartments for each tray and an initial temperature was recorded. The trays were stacked 7 trays high and placed in the food cart and closed the door. The 5 trays in the center of those 7 trays were used to take the temperature measurements.

IF USING NON-INSULATED TRAYS, YOU SHOULD USE HEATED CARTS TO DELIVER MEALS UNLESS YOU CAN RELIABLY DELIVER THE MEAL IN 20-30 MINUTES.

Though not as numerous as tray options, there are still quite a few variations of meal delivery carts out there. In this study, we compared the temperature retention performance of an insulated plastic cart (1), an enclosed aluminum cart (2), an insulated stainless-steel cart (3), a heated stainless-steel cart (4), and a basic open utility cart (5).

The same tray type was used for all cart trials (Tray A) so that we are only comparing the performance of the carts. Hot food items were portioned into the same two compartments for each tray and an initial temperature was recorded. The trays were stacked 7 trays high and placed in the cart (on top of the cart for the open utility cart). The 5 trays in the center of those 7 trays were used to take the temperature measurements.

IF USING INSULATED TRAYS, YOU HAVE 45-50 MINUTES TO DELIVER THE MEAL WITH ANY TYPE OF NON-HEATED CART. YOU HAVE AN INDEFINITE AMOUNT OF TIME USING A HEATED CART.

This time a foam insulated tray (D) was used for all tests instead of a solid plastic tray (A). Hot food items were portioned into the same two compartments for each tray and an initial temperature was recorded. The trays were stacked 7 trays high and placed in the cart (on the cart for the open utility cart). The 5 trays in the center of those 7 trays were used to take the temperature measurements.

IF USING NON-INSULATED TRAYS, AN ENCLOSED ALUMINUM CART WILL KEEP THE FOOD JUST AS HOT AS A PLASTIC INSULATED CART.

There is a system in the market that pairs a solid plastic self-stacking tray with a plastic insulated cart. This system pre-supposes that you can deliver the meal in under 30 minutes in order to be able to serve hot food. The purpose of this trial is to compare other cart options using this type of tray. We tested Tray C in three different types of non-heated carts - a basic open utility cart, an enclosed aluminum cart, and the insulated plastic cart that typically gets paired with this tray.

Hot food items were portioned into the same two compartments for each tray and an initial temperature was recorded. The trays were stacked 7 trays high and placed in the cart (on the cart for the open utility cart). The 5 trays in the center of those 7 trays were used to take the temperature measurements.


5. TRAY DENSITY IN A NON-HEATED CART

THE FOOD WILL STAY HOTTER LONGER IN A NON-HEATED CART IF THE CART IS FILLED TO CAPACITY WITH TRAYS. IT WILL COOL FASTER IF YOU DELIVER A SMALL NUMBER OF TRAYS AT A TIME.

This trial is to test the hypothesis that you will improve temperature retention for a non-insulated solid plastic tray by increasing the number of trays placed in the enclosed cart. The idea is sort of like hot coals. If you pile a lot of hot coals together, they will stay hot longer than if you had a small pile of hot coals.

For all the tests in this trial, Tray A and the stainless-steel non-heated cart (Cart 3) were used.

Single stack trial Hot food items were portioned into the same two compartments for each tray and an initial temperature was recorded. The trays were stacked 7 trays high and placed in the cart and door shut. The 5 trays in the center of those 7 trays were used to take the temperature measurements.

Full cart trial The cart was completely filled with food trays. Very little open space remained inside the cart that wasn’t taken up by food trays. For expediency, hot food was only dished into the 9 trays at the center of each stack rather than the entire 18 trays in each stack. The 5 trays in the center of those 9 were used to take the temperature measurements.

We’ve talked about the reasons that food satisfaction is important in corrections. For those running correctional institutions or the food service operation within, it may not be the number 1 priority, but it definitely makes the list. There are many things that go into how satisfying a meal is, one of which is the temperature level where hot food is served. So, knowing how to ensure temperature retention for meals delivered to the housing units is good information to have. This study provides data-backed Information that can be used to make good decisions.

Based on sections 1-5 of this paper, here are the overall key takeaways from the study data.


The 30 minute “cut-off” to serve hot meals with a non-heated cart can be a conflicting time point. “I can almost always make that but not 100% of the time”. “Am I close enough to that timing to get away with non-heated cart with no repercussions?”